Qty:
View cart ()
She was as menacing as she was beautiful, and I couldn’t help but wonder what she was thinking as she stared back at us. My best guess... 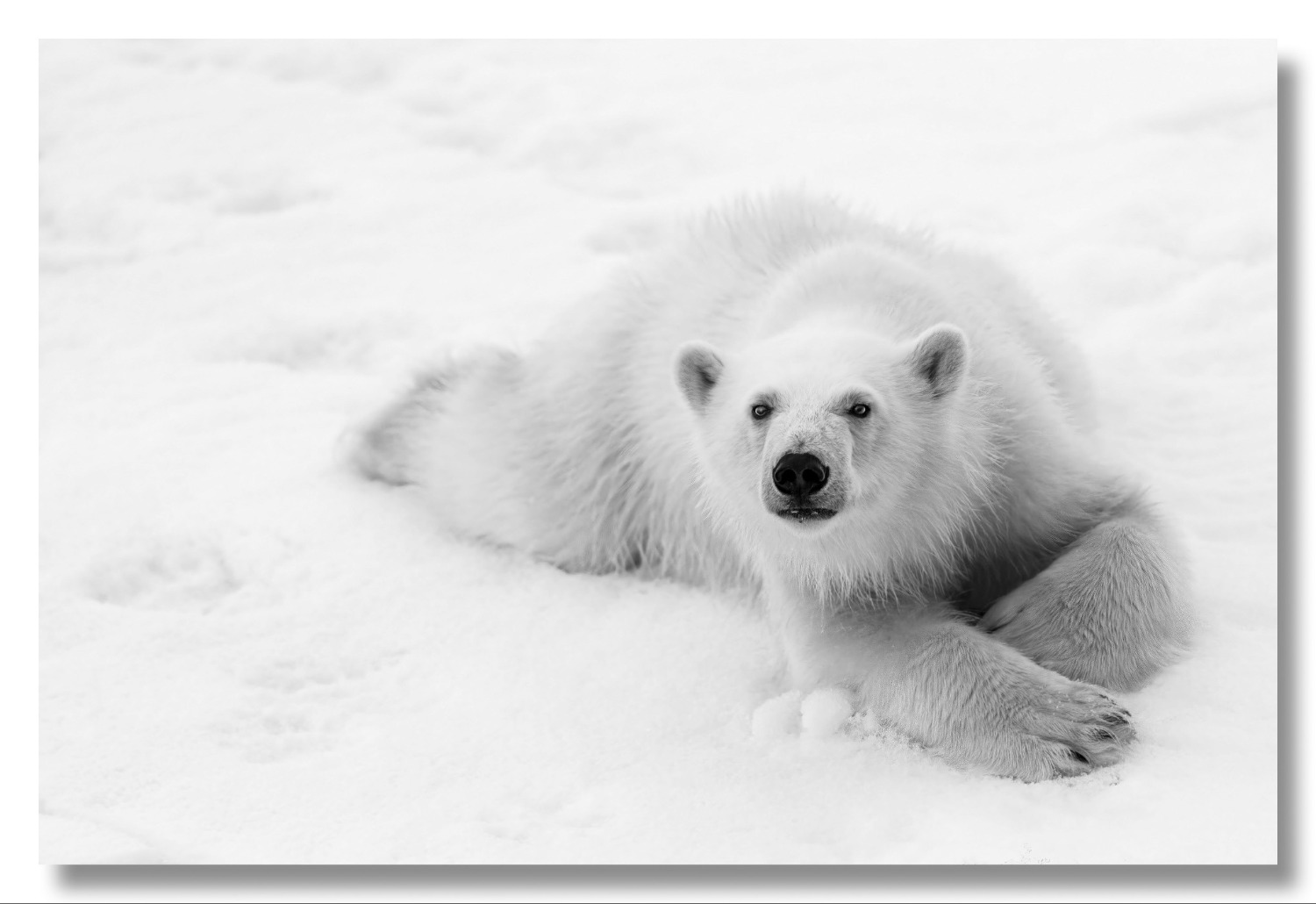 In the middle of the Arctic Ocean, about halfway between Norway and the North Pole, lies one of Europe’s last remaining great wildernesses - the Svalbard archipelago.

It’s a stark yet stunningly beautiful landscape that is dominated by windswept tundra, mountains and glaciers.

While it’s a place that may appear quite lifeless at first glance, it’s actually one of the most biodiverse cold weather habitats on the planet. It also happens to be one of the prime domains of the largest land-dwelling predator on Earth, the Polar bear.

It was around 3:45 a.m. when I woke to the tannoy system announcing: “A polar bear is approaching the ship!”

Within seconds I had grabbed my camera and rushed from my cabin, pulling on extra layers as I went. By the time I reached the deck, there were already a few other people there.

The excitement was palpable, with everyone talking in hushed yet excited tones and pointing towards the approaching bear. As she closed in on us, we went totally quiet, all in awe of this magnificent apex predator.

By the time she stopped, she was so close you could hear the snow crunching underneath her feet and inspect the finer details of her features. A perfectly conditioned coat of fur, piercing dark eyes and thick, sharp claws curving out from her immense paws.

She was as menacing as she was beautiful, and I couldn’t help but wonder what she was thinking as she stared back at us. My best guess: “Can I eat you?”

To capture this image at as close to eye level as possible, I had to lie flat on the freezing deck of the ship. Truthfully, however, I didn’t feel a thing.

In moments of magic such as this one, when you’re face to face with one of Planet Earth’s most iconic residents, everything else simply falls away.

Eventually, the condensation created by warm breath meeting icy air fogged up the viewfinder on the camera, forcing me back into the world of the aware. Fortunately, my polar bear trance didn’t stop me from capturing this gorgeous shot - in fact, I believe it’s precisely what allowed me to do it!

“Can I eat you?” is a simple yet striking piece of art that perfectly represents both the animal and the environment in which it’s found.

White fur blends into even whiter snow, leaving just the faint outline of a bear. The dark, contrasting features of the eyes, nose, mouth, ears and claws remain.

A ghostly apparition that stalks the barren sea ice in the eternal darkness of the Arctic winter and haunts the windswept tundra in the summer months. Yet the contrast doesn’t end with the juxtaposition of black and white.

Despite being a fearsome predator, this polar bear is in a relaxed posture with a curious facial expression that says “Come and give me a cuddle!” as much as it does “Can I eat you?”.

Its expression shows the bear for what it truly is, a vulnerable creature whose fate is ultimately no longer in its own gigantic paws.

Her habitat is changing so rapidly and profoundly that photographs like this could soon be priceless (and bleak) representations of the last generations of a genuinely iconic species.

In that sense, it’s more than just a Polar bear print - it’s a piece of art loaded with symbolism and ripe for late-night discussions about the future of our planet. 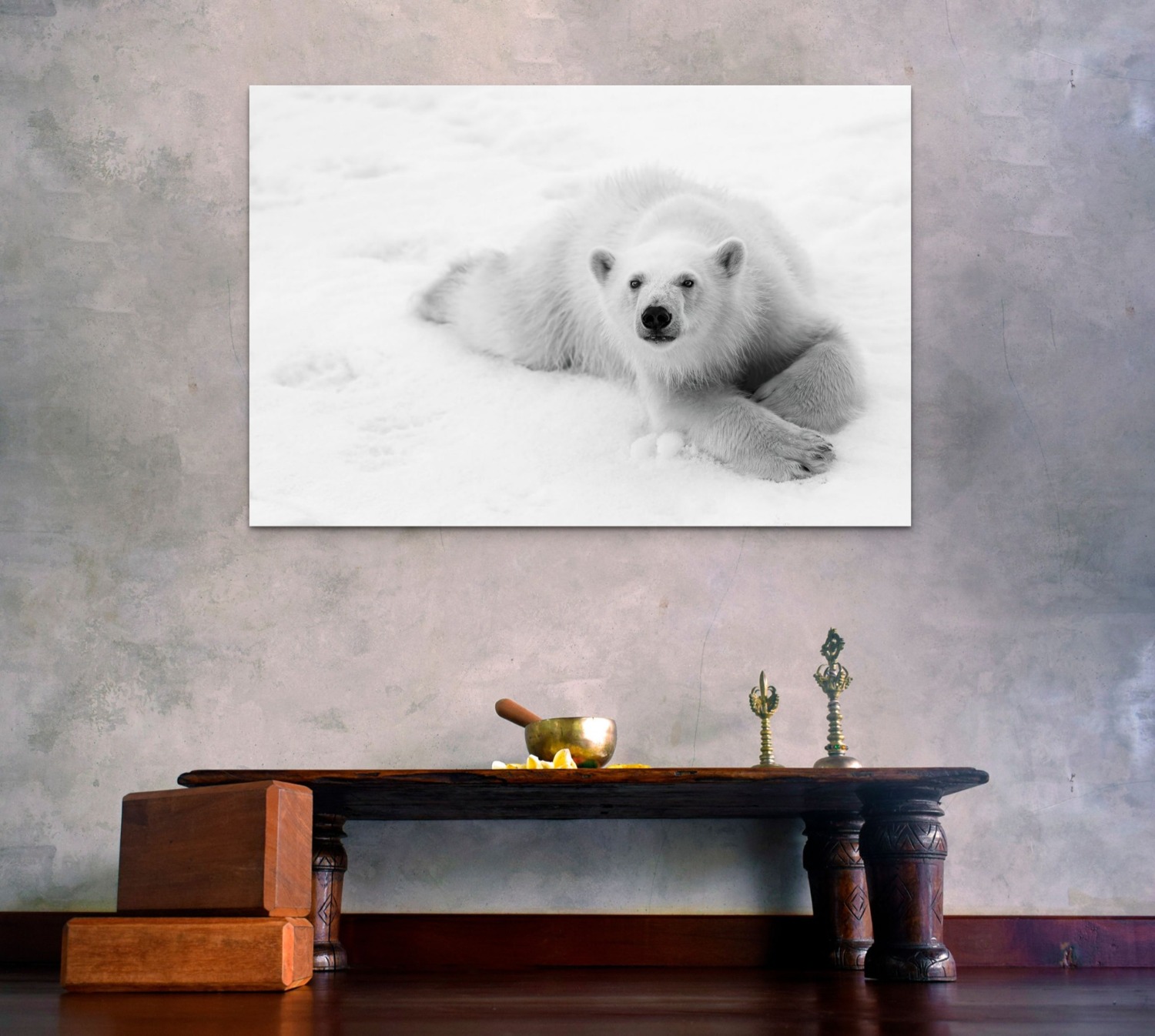