Qty:
View cart ()
‘Bulldozed’ is unique amongst the images in the Out Of The Grey collection in that it’s the only image that does not depict an animal in its natural habitat.

‘Bulldozed’ is unique amongst the images in the Out Of The Grey collection in that it’s the only image that does not depict an animal in its natural habitat.

It’s sometimes tempting to focus purely on the beauty of the natural world, but this would be doing it a great disservice. My work is indeed a celebration of the utterly incredible and stunningly diverse species that call Earth home, but if we don’t confront the reality of the damage we are doing right now, there may not be much left to celebrate before too long.

That is what this photograph is all about.

Unlike many of my wildlife encounters, this one came as a bit of a surprise. Although I never know exactly what I will encounter when on a trip or expedition, I’m normally in a place where I know there are things to find.

In this case, I was driving on a relatively busy motorway less than an hour and a half from Bangkok when I encountered a troop of Long-tailed macaques (also known as Crab-eating macaques).

They are some of the most recognisable monkeys in the world. They have a long history with humanity, having been considered both agricultural pests and sacred animals, depending on the culture and time.

These days, however, they are also known as the cynomolgus monkey due to their role as one of the most laboratory-studied primates in the world. They are also well known to many a resident of Asia and travellers alike due to their antics at temples throughout the Asian continent.

In many ways, they are the perfect example of our attitude towards the natural world - that strange mixture of reverence and contempt.

Watching them interact with the built environment stirred a strange mixture of feelings in me. The most obvious of which was a sadness about the fact that the world these creatures evolved in barely exists today.

That said, I’d also be lying if I didn’t admit that they stirred an element of childlike joy in me as they went about their monkey business in the middle of the road. Playing, fighting, and scrounging for food. It is remarkable how similar to us they are when you take the time to observe them and ditch the superiority-shaded glasses.

The macaque in this shot was a juvenile that had been excluded from the group (also a very human trait), which probably explains his long face. That said, this image still carries a powerful message. Animals can be sad too, and we give them plenty of reasons to be.

The experience of viewing ‘Bulldozed’ is quite unlike that of the other pieces in the Out Of The Grey collection. It’s not a playful piece of monkey wall art nor a celebration of the natural world.

Instead, it is a frank attempt to confront our impact on our environment and an image that is meant to stir quite different emotions from most wildlife photography.

If someone painted a monkey looking this sad, people would likely remark that the artist was anthropomorphising a wild animal to make it look like it had human-like emotions. Well, here is the proof that, in many cases, they actually do.

It doesn’t really matter whether the reason this monkey is sad is that he is being excluded from the group or because his home has literally been bulldozed and paved over. At the end of the day, the damage we humans cause is always felt by other beings eventually.

The juxtaposition of nature with the man-made is a powerful reminder that we share this world with other species and are increasingly crowding them out of it.

The image itself almost resembles pictures taken of downtrodden human beings living in forgotten industrial areas at the height of the great depression. It’s undoubtedly more powerful in black and white than it could ever have been in colour.

This lonely figure in a world of steel and cement might not be human, but he is close enough that we feel the discomfort acutely. This is what the natural world looks like in the 21st century. 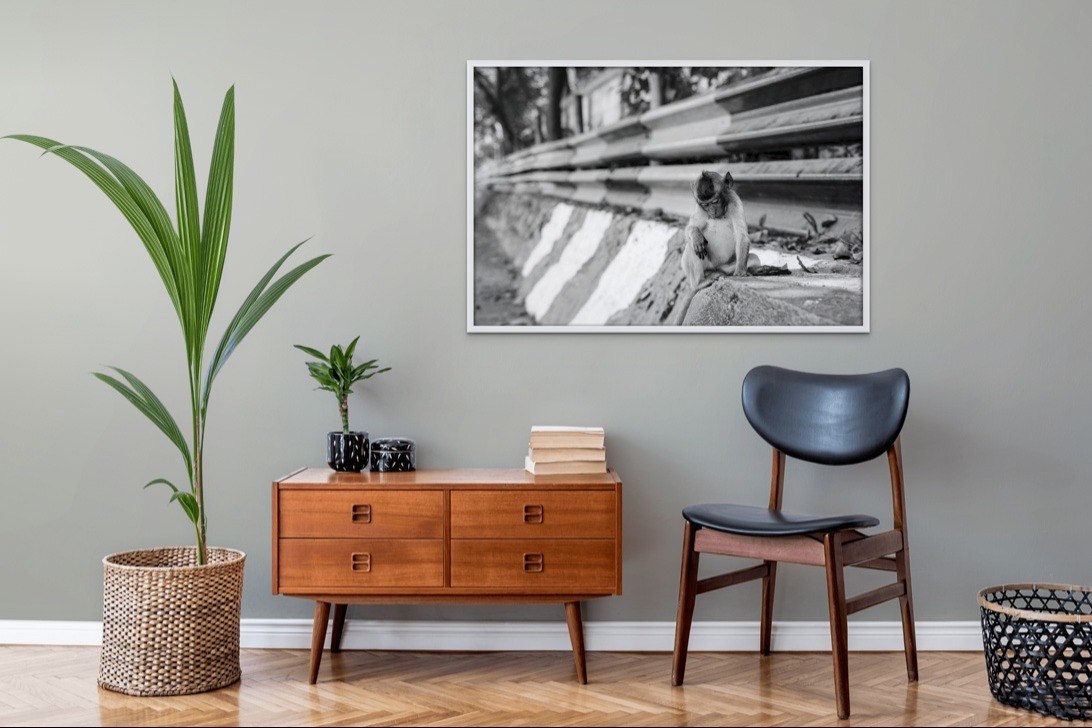